History of the Deauville training centre 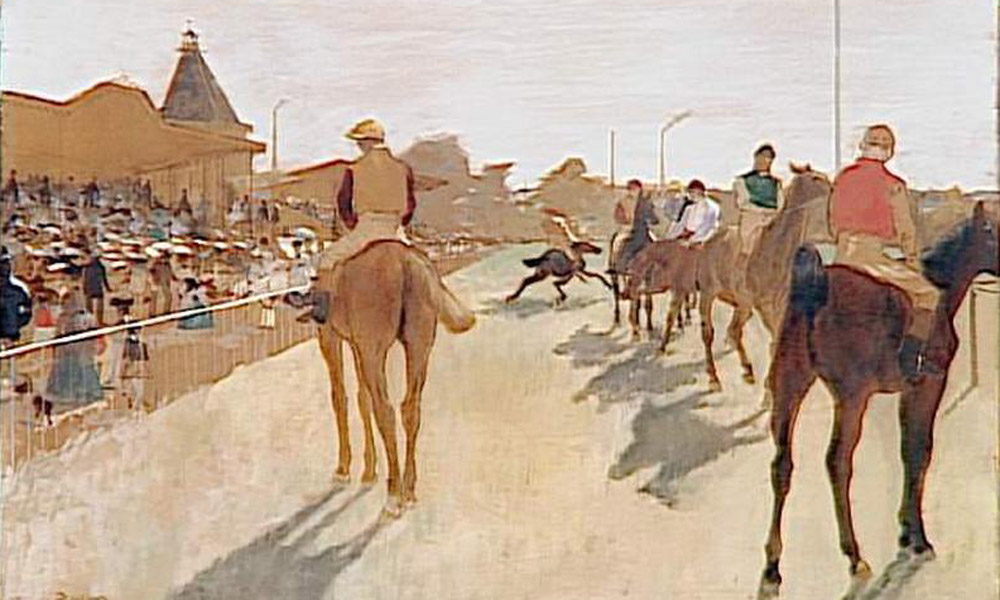 In 1859 : An improvised race meeting takes place on the Trouville beach.

In 1860 : During the development of urban planning, the construction of a racecourse at Deauville is being considered.

In 1864 : The Deauville-La Touques racecourse is built even before the church, thanks to the efforts of the Duke de Morny. The inauguration by the Duke de Morny, founder of Deauville and a true horseman, takes place in front of a big crowd and in the presence of an array of distinguished political figures and personalities.

The racecourse is cited on 70 hectares of dried-up marshes. One part of it has been sown with grass and two tracks have been carved out. The weighing room  where jockeys weigh in and out,  was located in a lovely Normandy-style thatched cottage, known as the “Pavillion   des Balances ». 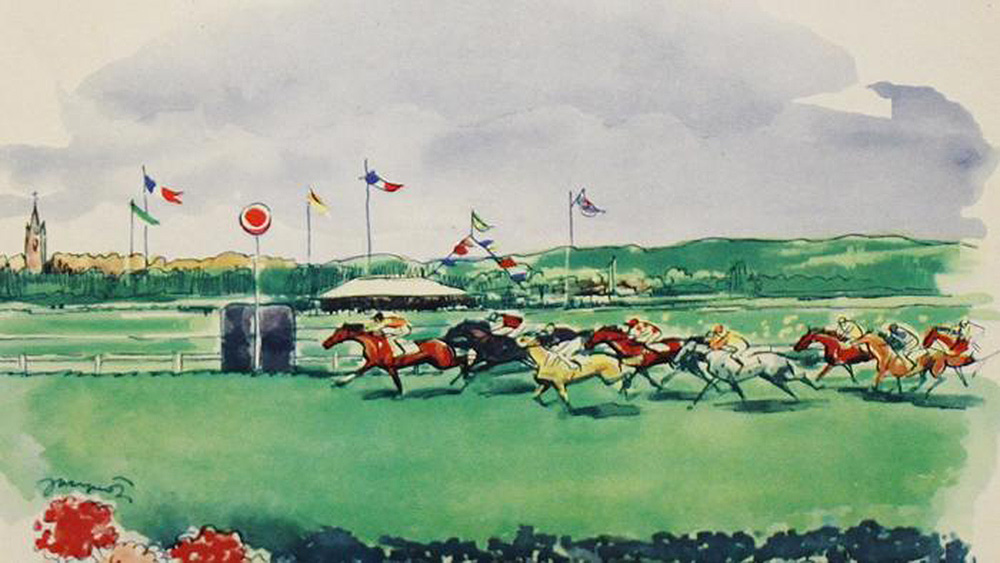 In 1865 : Creation of the Deauville racing society and of the Prix Morny. Equine diversification continued around the racecourse.

In 1871 : Creation of the Grand Prix de Deauville. The Deauville-La Touques racecourse undergoes a series of alterations between the end of the 19th century and today.

1880 : Construction of the weighing room inspired by the 18th century vernacular structures of the Auge region, built by Delarue, an architect from Trouville.
First Polo match on the main part of the track 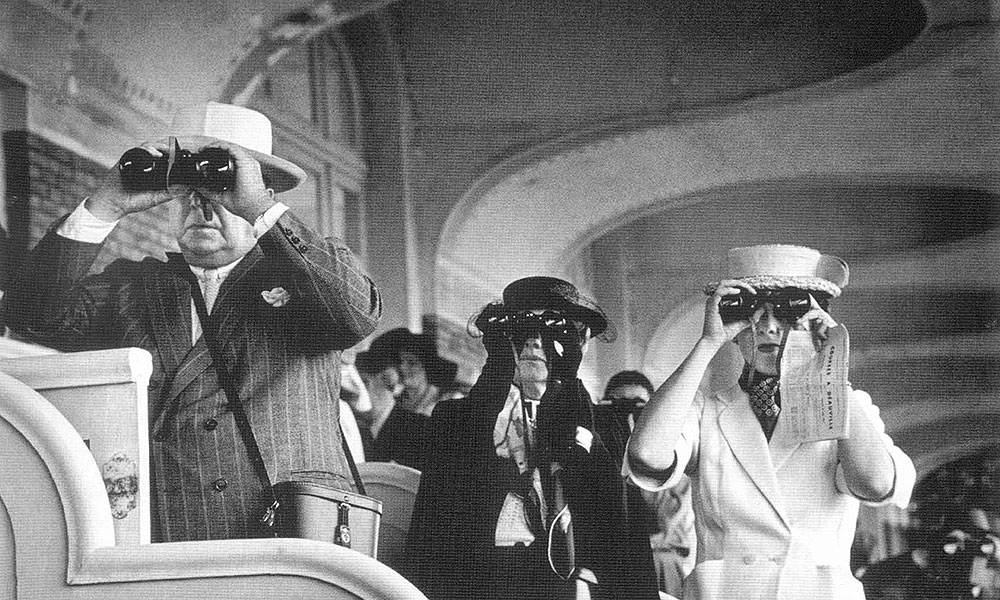 Just before WWI and thanks to Count Jacques le Marois, Chairman and Commissioner of the Deauville racing society, President of the Circle between 1911 and 1921 and Board member of the Société d’Encouragement pour l’Amélioration de la Race Chevaline (today France Galop), several developments are carried out :

– The 1 600-metre straight is   installed,
– The old stands are replaced in 1913 by new ones   resembling those at Longchamp,
– The weighing room area is   enlarged and a new avenue links the weighing room with the Mauger boulevard,
– Construction of a car parking lot,
– A new parade ring,  designed by landscape architect Thouret, is built,
– Creation of the Prix Jacques le Marois, named after the former Chairman of the Deauville Racing Society,
– Jump racing is abandoned and from now on only flat race meetings are staged.

In 1913 the complex is extended to the south, incorporating several buildings of the same style. The development of the weighing room area and the parade ring is the brainchild of Eugène Thouret. This landscape architect is also responsible for the gardens of the Carrières-sous-Poissy (Yvelines region) equestrian centre owned by wealthy American William-Kissam Vanderbilt, who also own the Villa La Chaumière in Deauville.

The stands of the second empire are rebuilt in 1919 on the initiative of Jacques Le Marois, the Chairman of the Société d’Encouragement: protected by a large canopy, architects Louis Lefranc and Alfred Pigny add a monumental concrete construction, partially embellished with brick cladding, that can accommodate 2 000 spectators. Its solid appearance is diminished by an abundance of protruding elements (bow windows, arcades, porches).

In 1921 the Société d’Encouragement acquires the land south of the racecourse where it will build stables. They are designed by Charles Adda, who also adds four villas. Two of them, the Le Thym and Bottom-of-the-Hill, were four stories high. The other two, Les Polos and Punta-Gorda, with boxes on the ground floor and rooms on the first, were built to house horses and their owners on race days. 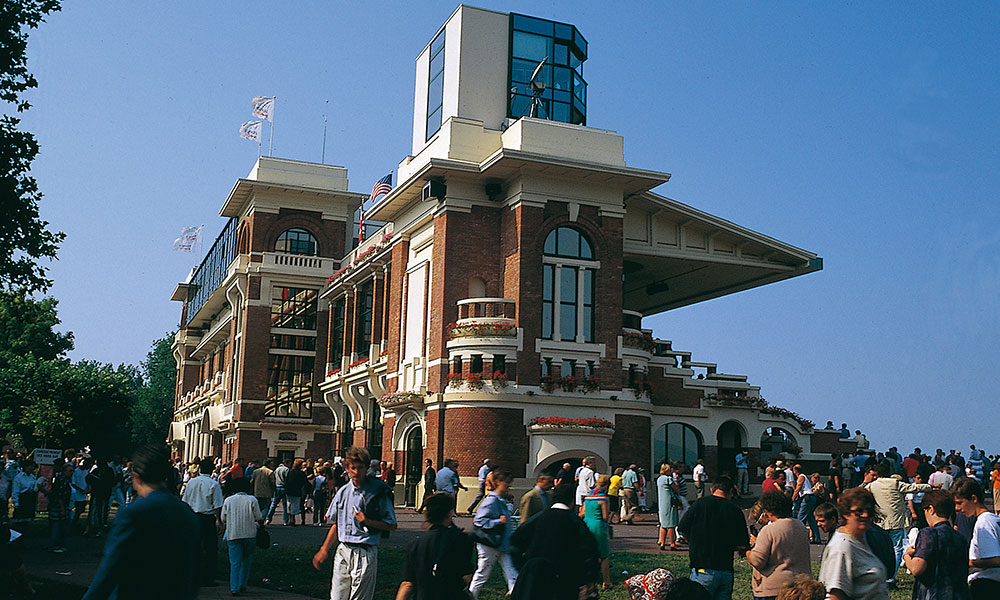 En 1982 : Creation of a permanent training centre where horses are trained all year round.

In 1994 : France  Galop, is facing an economic crisis and decides to shut down one   of its racecourses: Evry, Maisons-Laffitte, Chantilly and Deauville are  all threatened.
DThanks to the mobilisation of   the local communities, Deauville racecourse gets a “facelift” and modernises with new stands and a panoramic restaurant.  Deauville is saved.

In 1995 : The site is entirely rehabilitated, especially the stands and the parade ring, which gets a new layout. 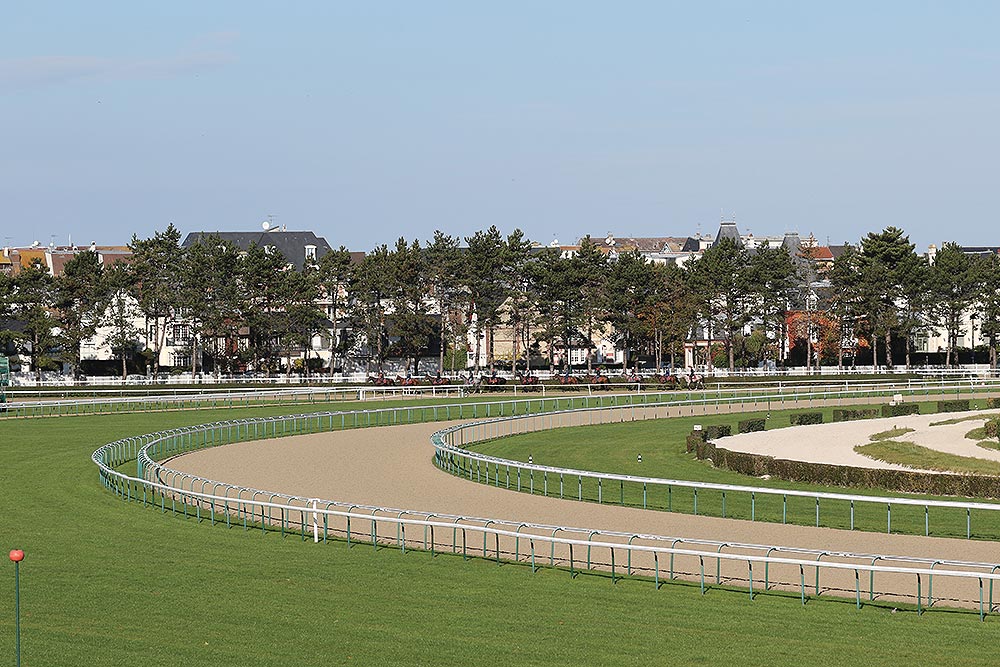 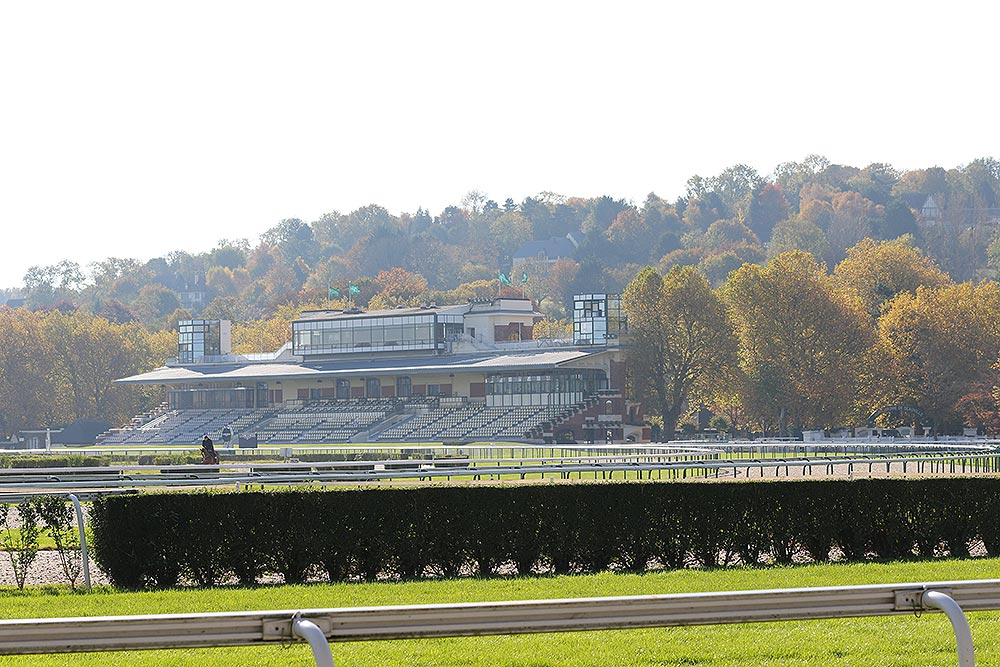 In In order to offer a racing programme during the winter, the Municipality, the General Council, the Regional Council, the Racing Society of the Auge region and France Galop come together to   construct a new 2 000-metre round all-weather track (viscoride). This track helps to relieve wear and tear on the grass track. Hence, during the winter of 2003 and 2004, the first winter meeting takes place at Deauville.

In 2007 : The first races to be held in late morning take place here. La Touques racecourse thus becomes host to the highest number of flat races in France. It hosts flat races spread over three main meetings: a summer meeting during July and August, a mini autumn meeting of three days around Equiday’s, and a winter meeting in December, January and March. 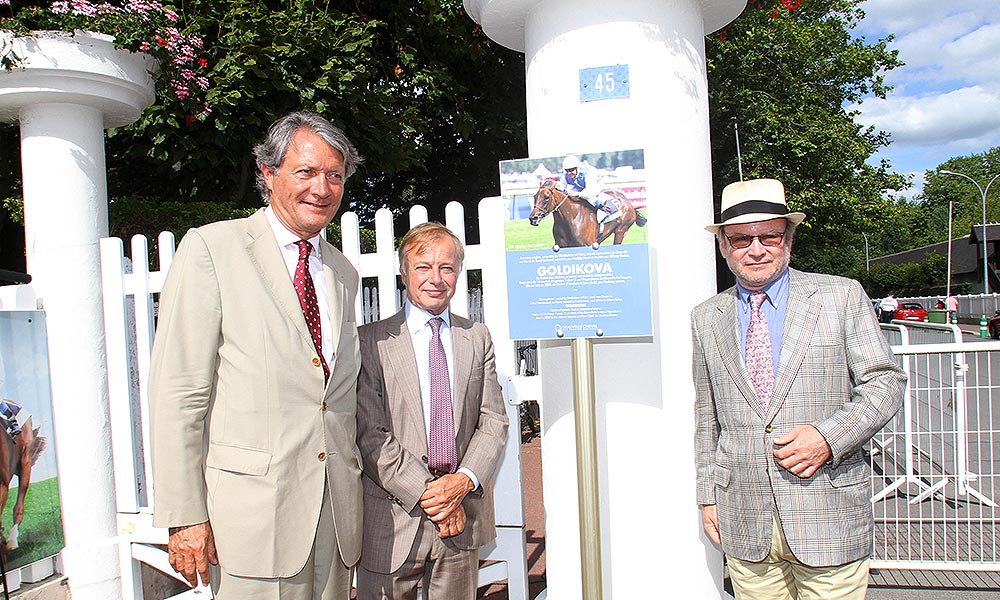 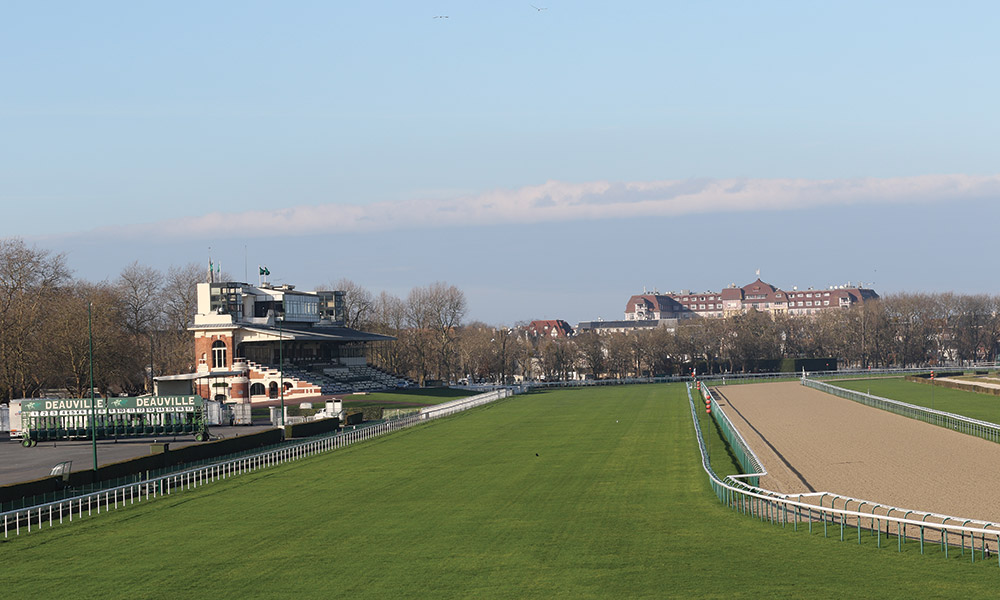 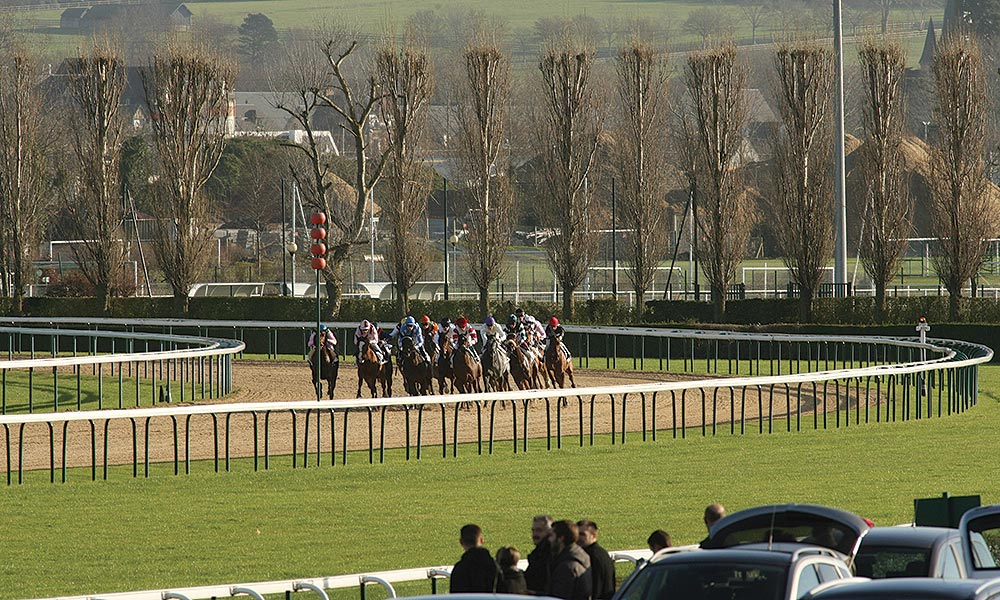 In 2013 : Unveiling of a plaque honouring the mare Goldikova, the winner of 17 races

In 2014 : Renovation of the fibresand track

Today, the August meeting remains the most prestigious meeting, especially around the time of the famous yearling sale at the Elie de Brignac auction ring. The main races are :
The Prix Rothschild (formerly Prix d’Astarté) for three-year-old and older fillies over 1 600 metres, which takes place on the last Sunday of July.
(it anonce the beginning of the meeting)
The Prix Maurice de Gheest, a sprint race over 1 300 meters on the second Sunday.
Le Prix Jacques le Marois, this racecourse’s richest race of the year, over 1 600 meters and which takes place on the third Sunday.
The Prix Morny for two-year-old colts on the fourth Sunday.
The Prix Jean Romanet, open to fillies and mares, also takes place on the fourth Sunday. Run over 2 000 metres, it became the fifth Group 1 race to be staged at Deauville when it achieved championship status in 2009.